YOSHI was originally rescued by the South Fla SPCA and an adoptive owner was found for him.

However this owner moved and Yoshi’s whereabouts were unknown until he was finally rescued by the Horse Protection Assn of Fla in Micanopy.
He is a friendly fellow and happy in his pasture with his girlfriend Roxanne as well as pasture mates, retired circus horses Johnny & Bridgette. 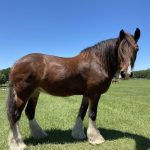