MIO was rescued along with his close friend Satchi by the South Florida SPCA in a neglect case. They were both underweight and unable to be handled. After a year of rehabilitation by the team at SFSPCA they regained their vitality and were no longer wary of humans. MIO is now a friendly and enthusiastic fellow and is enjoying his new home with pal Satchi and other pasture mates. 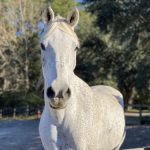 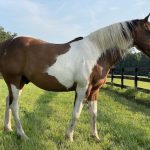