CAPTAIN JACK was rescued by Faith Equine Rescue in Sumter County. He was one of eleven horses seized in a cruelty case. He was adopted out to a family but returned later when “their daughter outgrew him”.  Jack is a handsome horse known for his good manners and his friendly approach. He is blind in his left eye but this does not dampen his enthusiasm. 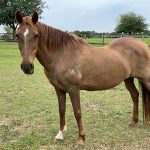 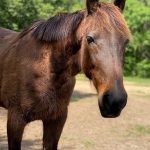